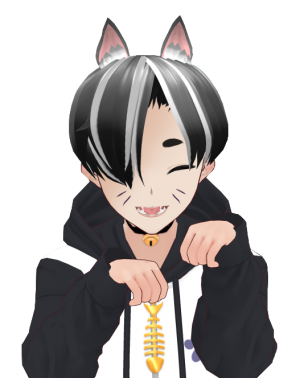 Mikey is a neko Vtuber who loves meeting new people and making friends. Mikey streams a wide variety of games including FPS, horror, fighting and platforming. He is primarily wholesome but doesn't mind 18+ content.

Mikey was abandoned as a kitten, but with some help of some people he now calls friends he was taken care off and looked after. He was given a magic collar that gave him his own body that is a half human half cat hybrid, making him the neko boy he is today.

Mikey has a sister name Michelle who he was reunited with after being separated at birth, and together they help keep at bay an evil deity who's name has not been revealed. He is simply known as "Evil Mikey" because he is trapped in an empty husk of Mikeys body. He was tricked by Mikeys innocent look and trapped in a pocket dimension, where he lies and waits for his opportunity to be set free.