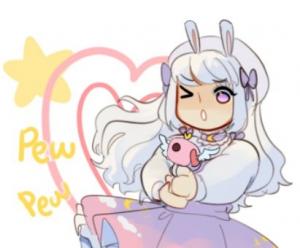 Mii is a female Virtual Straemer who makes content in English.She plays variety of games, but has a preference for horror games and visual novels. She also loves to support indie game developers by playing their games and make reviews on said game. Her main priority is making her viewers feel comfortable and giving them the best experience that she can give.

In her human life, Mii lived as your normal student attending her classes, working part time in a maid cafe, and taking care of her beloved hamster, but due to unfortunate events she had suffered from a terrible car accident that made her pass on... to another life.

Mii was transported and reincarnated into a new world. She at first felt uncomfortable having no funds nor the strenght to go travelling by herself, she had decided to stay at the safe town and worked at the shrine nearby that had believed on the same morals as she did which was to be kind, caring, and most of all, "comfy". Kaiteki Shrine wasn't as popular and didn't have as many guest, but with the help of Virtual Streaming Mii started advertising her shrine which made people come and stop by to get blessed and meet new friends!

Mii's life in the new world started becoming great, she was anow a shrine priestess at Kaiteki shrine alongside her visitors and her loyal companions.