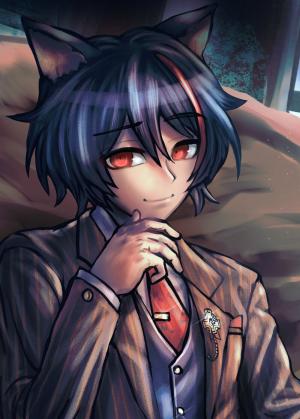 Merry is a male English-language VTuber who is the head of the Merryweather Comics creative circle, where he gained popularity as a webcomic writer and producer.

Merry has a very relaxed vibe the majority of the time, but when he gets excited he barks like the dogboy he is. He hardly if ever swears and requests those on his chat refrain as well. He is easily scared by horror games such as Phasmogoria, but otherwise has a very relaxing aura even in collabs. This vibe has sometimes been known to descend into chaos on a few occasions; for instance, during games of Frost Punk where he pretends to be a "maniacal dictator of Wooftopia".

Merry takes on a dogboy appearance, having almost chin-length black hair with a single red streak and short pointy ears, often being mistaken for cat ears. Merry's usual outfit consists of a brown pinstripe three-piece suit with a red tie, but on 19th of November in 2020 he debuted a new navy/black military outfit, which he uses for certain games.

He loves receiving headpats, and is known to demand for a "TREAT!" from his friends.