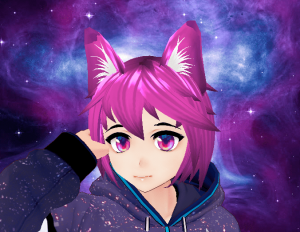 Mechy, AKA MechyFox, is a magenta kitsune who usually streams sci-fi, horror, shooters and VR content, and regularly collabs with other vtubers as well. Once a member of Cyberstars from January 2021 - July 2021, they are now independent in pursuit of other interests. Most days, they stream from 7 or 8 pm CST to a few hours later. They prefer to stream sci-fi and horror games.

People have been asking me a few questions about myself and I figured it’s about time to answer those questions!

How did I turn into a kitsune?

I used to be a privateer for multiple different spacefaring empires, hunting pirates and conducting escort missions for various diplomats. On one fateful contract, as I was probing the outer rim for several trace quantum particles to complete a scientific mission. I was ambushed by a strike group of pirates who had caught up to me. They chased me across a few systems before they finally crippled my ship and surrounded me.

I thought I was done for, but a shrouded mist from out of nowhere slowly grasped and enveloped the ships, tearing them to pieces. I looked behind me to see where the mist came from, but only an abyss met my gaze. In a few seconds, however, something looked back at me in the form of two bright eyes in the shape of a fox. Its presence was off-putting, yet comforting. I could see visions of protection, comfort, and flashes of destruction. I didn’t know what it was, but something about it felt... important. Very important. I know not who, or what the entity that saved me was, but it undoubtedly came from the edges of our reality.

As quickly as it came, it left. A bright light engulfed my ship and next thing I knew, I was in the middle of a star port with my starship safely docked and ready for flight. I had turned into a magenta kitsune, with ears, tail, and all.

I take random jobs and contracts across the galaxy, going on adventures and searching for the cosmic entity I had encountered. Every once in a while, I’ll find isolated singularities that resonate the same quantum signals as the fox entity. These singularities will take me to different parts of the galaxy, and sometimes even into different dimensions. For some reason I feel like the cosmic entity is leading me somewhere.

Other than my hair glows in the dark, I figured out I can float a little bit off the ground for funs ^w^ Oh, I can also summon eldritch tentacles and retract my tail at will!

I’m able to utilize many weapons across the galaxy, though I prefer energy weapons to get things done.

What ship do I fly?

I fly a C-226 Aurora Fighter. It’s technically a long-distance fighter but has enough space to carry various cargo and equipment (or some extra firepower ;3)

Where have I been?

I have been across the galaxy and through multiple alternate dimensions. Some have been more dangerous than others XD