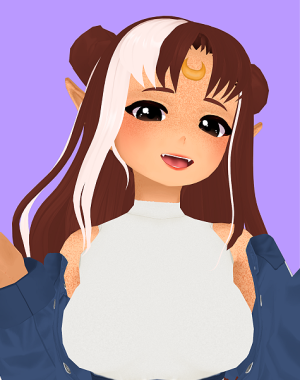 Mavis DeLuna is an English-speaking non-binary and genderfluid VTuber who streams a variety of games and sometimes chatting with their viewers. Their name is pronounced Mavis with the "A" like in "apple." Mavis uses they/them or fae/faer pronouns.

Mavis changes their appearance and gender presentation to suit their comfort level at a specific time, and has an androgynous, feminine, and masculine set of appearances. They are a strong advocate for the LGBTQIA+ community, doing everything they can to make their streams safe, inclusive, and welcoming to all marginalized groups of people.

Their aesthetic is inspired by the 80s and 90s eras, and their favorite media: Deltarune, Sailor Moon, Pokémon, The Legend of Zelda, and Bayonetta. When ending their streams or saying goodbye to viewers, Mavis says "catch you on the flipside," a slang phrase used by radio DJs in the 1970s popularized as a way of saying "goodbye" and mistakenly thought to be 90s slang.

Their subscribers are called "The Spade Squad" based on the Spades card suit and the characters serving under the King of Spades in their all-time favorite video game, Deltarune.

A Lunarian Elf from an island of powerful witches, concealed from the outside world by surrounding magical mist, Mavis left home to see the world but ended up on Earth by accident through a botched Telemancy spell. They are genderfluid, using glamours (magic) to change their appearance depending on their comfort and gender presentation. Alternate "versions/universes" of Mavis exist, but they are not often spoken about.

After being able to leave Earth, Mavis travelled to Earth's moon and created the Moon Palace, a castle of magical rooms and surrounded by lush life, with the help of the goddess Selene. There, Mavis lives with all of their friends and family, and guests can come visit as they please. Many Clefairies act as "helpers" around the Moon Palace, keeping it tidy and organized. For their kindness and generosity as well as their willingness to house others when they have nowhere else to go, Mavis was coronated as the ruling Monarch of the Moon Palace.