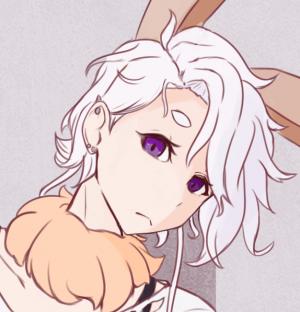 Mariposa is a Brazilian comet moth Vtuber who mostly streams in English!

Most of her streams are focused on art. She drew and rigged herself and hopes to create more vtubers soon!

In the virtual world, there is a lawless wasteland governed by chaos, where petty warlords fight endless wars and territory changes hands constantly. Mariposa was born in this turbulent land, with no memory of her biological parents, she wandered as a street waif, stealing and running to survive.

One day, she tried to steal food from a cloaked man, who promptly caught her and decided to take her in and teach her how to fight. The man turned out to be an orange cat-man, with black stripes and a weird hatred of mondays for someone with no 9-5 job.

In time, she became a great martial artist in her own right, who could fend for herself even in this harshest of lands, with his job now done, the cat-man left her a message, saying simply "I must finish what I started" and left in the middle of the night.

Since then she has lived by herself. Despite living in such a harsh land, nobody bothers her after an incident where she threw a warlord into the sun, and so she is free to bum around and spend her time drawing and playing videogames, while searching for her adoptive cat-father every now and then.