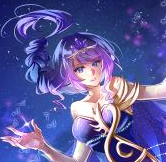 Mai (舞) or Mai Melody (メロディー) is an English VSinger/ VTuber residing in Terra. Mai, meaning dance, and Melody meaning melody, her name is a direct translation of the word song. She is the personification of music, a dance of musical notes forming into a beautiful melody.

The Sound was one of the first creations of the Creator, making her a vital pillar for humanity. Along with her siblings, Rhythm and Harmony, they blessed the universe with their symphony.

Eons later, Melody took a leap of faith and became human, adopting the name Mai Melody instead. Reborn as an infant, mama and papa Melody raised her as one of their own, knowing that she was not completely human.

Now in the present, Mai finds herself to be a beacon of light in her own "sanctuary" for humans lost astray amid the cruelty of the world, whom she calls Darlings.

As she continues to nourish every one of her beloved darlings with her everlasting love, one would eventually realize that the place they know and love could sometimes be winding and ominous.

However, none of them wishes to cease receiving the endless warmth and love that Mai blesses them with every day.

As one of the wisest among them said: "Why would we want to get out anyway?"

Taken from the Greek word 'Kakos', the word Kakkovvony had a new meaning, a mix of both Kakos and Cacophony. Queen Kakkovvony became jealous of Melody's accomplishment, desiring something that she could never have. No matter how hard she tried, Kakkovony could never bless anyone. All she could do was curse mankind.

Now, unlike Harmony and Melody, Queen Kakkovo grew mighty from the negative energy of oppressed mortals. With the help of traitors, she transformed into Mai, secretly taking over her role when she wasn't around, cursing her Darlings. The deception was proven to be effective, at least for a short period of time. A wave of distress rolled in, deafening humans with their bad sound. Impostors arose, luring mortals to a dangerous path the Melody would never take.

Under the influence of Queen Kakkovvony Mai Darlings turned gloomy. Alas, a curse and a blessing would collide, there was no middle ground. It didn't take a genius to distinguish the difference between the two. Mai the Melody finally declared war between the two.

To protect mortals, first, Mai has to strip off her human body, transforming back into her true deity form.