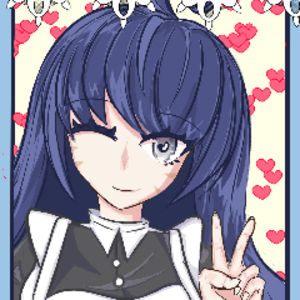 Madi is a female VStreamer who enjoys comfy moments, but can get a little chaotic and loud. She enjoys a variety of games, from Subnautica and Hades, to Valorant and Dead by Daylight. She always does her best, either in game, or helping and befriending others.

MO-426 was an M.A.I.D.-O. (Military Android, Incident Division - Officer). While working partly as a detective on an important military-related case, she was pulled from her universe forcefully by a mysterious force, splitting her from the main AI system, the Mother-System. While she managed to get back into her original universe after some time, she was never the same- especially not after the Mother-System gained self-awareness and began a takeover of the government. She did her best to survive, eventually being forced to detonate the core of the space station, Raven Manor, causing a time-rift and transporting her to 1995. She spent time reconning Earth from the orbit of another planet, taking on the name Madi Corax, before arriving and starting vtubing, as a way to get away from her past, and create a brighter future.