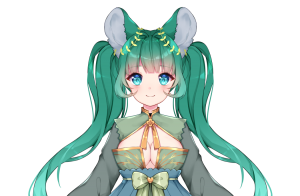 Early 2021 Mousie began to go by Sie, and later changed her name to Nyxsiie or (Nyxsie) On June 30th 2021 LvMousie was changed to MousieMagick as a joining of her lore, and her shop.

Mousie is a variety Vtuber/Streamer from The United States that streams content in English; Mousie streams many Shooters Like Halo, Left for Dead, and GTFO. She has a joy for emotional puzzle games & likes to talk to her chat while she does art commissions on the side. She has a cheerful demeanor. Her most popular redeemed on stream is "Chuu."

6-26-21 Mousie had reverted back to a PNG tuber to begin the transition into her new design. The new design holds a very strong significance in her Lore. Which Mousie plans to reveal during her re-debut scheduled for sometime in September.

From 11-15-21 to 6-25-21 Mousie was adorned with her Sunflower Motife and her Bright yellow dress, previously her flower and bright aesthetic made her highly recognizable. She has recently released an alter outfit for her character and claims to have more coming after hitting various milestones. Mousie's Debut was on 11.15.2020. She has been steadily growing with her community.

Added note: Mousie has a spin-off Parody Twitter called MousieLewd, where she posts pictures of dirt.

Mousie's Lore was described in her Debut Stream with a Webtoon that can be found in her discord.

Mousie came to this world due to war and magicks. Mousie's predecessors are an orange-haired witch named Collette, and an Apoticary named Aurelia.
Aurelia was fond of flowers and cared for a small mouse that sunbathed on the sunflowers in her shop. Unfortunately, a magical war broke out, damaging the cottage where Collette & Aurelia were working. Aurelia lost her life while being struck down by the damage to the building, but the mouse and Collette survived.

Collette had tried to bring back her lover with the magick she possessed but was not strong enough to do so. The small teal mouse that Aurelia was fond of, came to Collette offering herself up to save Aurelia, but there wasn't anything to be done.

Until Collette made a pact with the goddess entity Valkidy to give Aurelia a second chance at life. The magick didn't bring back Aurelia but ended up fusing her essence, with the life of the small mouse and they became one.