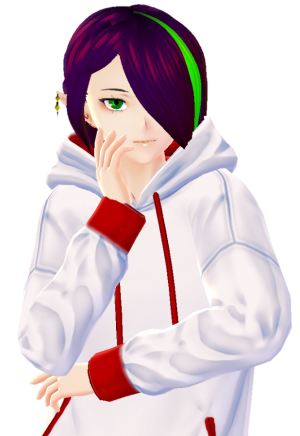 Lundos is a Virtual YouTuber who makes content in a variety of languages, but primarily in English.

Lundos is a half-elf. He has shoulder-length purple hair, the streak changes its color depending on his current mood. His right eye is green, his left eye is completely black because he sacrificed it while creating an emergency portal. He generally hides it with his hair.

Lundos is commonly seen wearing an oversized white hoodie and long black pants, but sometimes he puts on a formal black and white suit. He always wears a golden earring with a magic symbol engraved into it on his right ear.

When Lundos gets a blood surge his eyes sometimes go black and he grows sharp teeth. This only ends when he drinks blood, so he frequently asks other VTubers if he can drink their blood, but he never drinks fox blood. A sideeffect of this is his ability to assume certain physical features of his victims, like animal ears.

He is also a professional voice actor and likes to draw.

Lundos is a half-elf from the city of Jormungand. When the city fell during the great war of Xalta, Lundos and his two sisters, Lucy and X3lia, escaped through an emergency portal Lucy created, unfortunately these portals are not particularly known for being stable, so they ended up in the human world.

To create such a portal you have to pay a tribute to the old mana spirits. Lundos didn't want Lucy to be hurt, so he casted another spell in secret, that made him the target. He thereby traded his left eye for her. To this day his eye feels cold due to the amount of mana constantly flowing out of it. This lack of mana can also lead to a state where he experiences a strong desire for mana-rich blood.

They are currently searching for ways to charge their magic up again...

Lundos has genes from several races. Whenever someone guesses his race (or sub race) more of his lore is revealed.