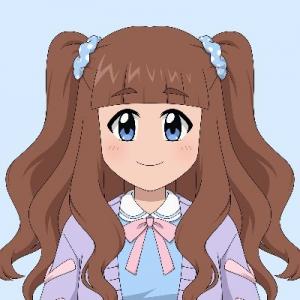 Lunacchi is a VTuber who makes content in English and Japanese. She is a freelance illustrator and part-time idol, and dabbles in voice acting. Her streams focus on cute art, Japanese music, and a generally comfy and positive atmosphere.

Lunacchi was just a normal foreigner living in Tokyo, Japan. Living in a little apartment which she rarely left, she daydreamed about one day opening her own store and clothing line, as well as becoming an idol.

One day, a magical mirror appeared in Lunacchi's office. The mirror suddenly started glowing when she approached it, and a hand reached out to her from inside. That hand was none other than herself from another dimension...a dimension where she's a popular idol beloved the world over!

Made possible by the existence of the magical mirror, Lunacchi will switch out with her alternate self once a month, and perform for "her" loving fans. Occasionally, however, she also uses this mirror to be transported into other people's houses in order to steal their snacks. She feels no remorse for this.