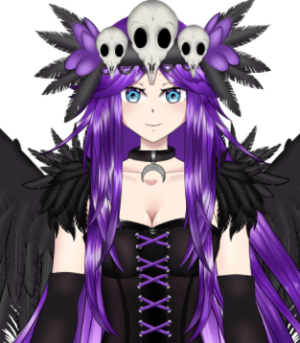 Luna Valkyria is a female VTuber who makes content in English. She plays a variety of games and has very wholesome and chaotic vibes.

On the day a Valkyrie is born the very flowers from Valhalla's Gardens are affixed to her headdress so that wherever she may go home is always with her. Using her very own magic she makes these flowers last forever, and only by her very will may she cast them aside to wilt. The day of a Valkyries Birth is one of merriment and celebration. It is the day she is given the blessing and favor of various Gods and Goddesses. I remember the day I received my mission from Odin so clearly. It was a day of feasting and drinking not unlike the day of a Valkyrie's Birth. While my mission was one that would bring impending battle and strife, it also brought hope to Valhalla's Gods. For the ending result could be used to aid Odin and his allies in the Final Days, or to bring Ragnarök to Valhalla's very Gates. Upon descending to Midgard two things were clear: Luna needed a place for her Ravens to call home, and she was completely and utterly lost. How did the humans navigate such a vast home? Then again it wasn't uncommon for her to become lost in Valhalla as well. After wandering for a while in the forest, it was clear this place had long been abandoned by humans and with a bit of Valkyrie magic could become a home for her and the Ravens both. After all, the safety of her loyal Ravens was her top priority and humans had a way of causing trouble even if they didn't mean to do so with the unknown. As she wandered, she came upon an old what would the humans call it.... Castle? It was perfect, or it would be when she was done with it. While it took some time, she eventually made a grand Castle and turned the surrounding forest into a realm of sorts where her Ravens could freely explore without any humans interfering or endangering them. Thus, the Raven Realm came to be and all before dawn. Perhaps there was still some time to enjoy the night. The nights in Midgard were quite beautiful, and there were none she would rather spend it with than her Ravens. This preference would make her quite the nocturnal Valkyrie in time, and their Raven Queen.