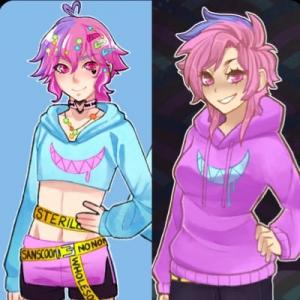 Lucy candy is both a female and male Vtuber/VStreamer, who is a variety streamer and mostly does just chatting streams. They also have a news segment for all the VTuber news known as Lucy News Network aka LNN, a game show, and an interview segment.

Lucy is a male and a female both being the same person but from different dimensions They are both are the same but have multiple differences. Both Lucy's own are super good at gambling, both owning their own casino.They both are accompanied by there familiars that they found in the trash known as Kit & Kat, Lucy is also known to have their signature weapon a baseball bat with nails named JawBreaker. Lucy is known for there love for gambling and sweets! Lucy is known to have multiple evolution's all determined by the color of the highlight in their hair, ranging from purple=natural light blue=insane aka their mode named SUGAR RUSH, and galaxy=???

Lucy is known for spending most time with their friends has had multiple battles with great opponents!

More about jaw breaker- Jawbreaker is made of a unbreakable wood strong enough to reflect bullets.

More about Kit & Kat - Kit & Kat were found in a dumpster in an alleyway, They then found a special love for Lucy Kit & Kat have the ability to shapeshift in to anything they wish they are made of some odd goo and wear mini candy wrappers that resemble the logo on Lucy's Hoodie.They cannot speak unless they shapeshift to a humanoid form they naturally speak with bubble noises, They move by turning into shadows and glide across the floor. They are also able to merge with Jaw Breaker and make an extra coat of protection and add variants to the bat. Kit & Kat are unable to die seems they just merge back together after any damage,They also cannot feel pain,The size of Kit & Kat changes,They normally hide in Lucy's hair.

More about FL (female Lucy) = Female Lucy is a tomboy punk who owns their casino and isn't a big fan of anything except gambling it would seem FL is as dumb as a brick except when it comes to gambling, It seems they never loose at any game that involves gambling,They also LOVE CANDY most say Fl Smells like cotton candy and taste like it??? (Has started feeling wolf like features???)

More about ML (male Lucy) = Male Lucy is a fem-boy punk He loves to put on drag shows at his casino that he owns! He also hates getting his hands dirty so has Kit&Kat do all the dirty work, He isn't the wisest but Is amazing when it comes to gambling. They aslo seems to smell like cotton candy, and love Candy! (Has started felling cat like features???)