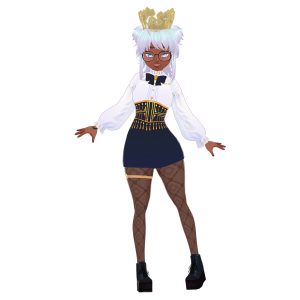 Very long ago in an Empire far away, Lola and their twin were born into a rich line of Imperial Royalty and as the firstborn twin, it was their duty to one day become Emperor. Lola had always been a rambunctious scamp of sorts but following a worrying fall from a tower as a child, they fell into a coma and woke up...different. While Lola remained as kind and loving to the Empire they loved and were born to protect one day, their behavior became more and more chaotic (from turning the Royal Alchemist's fine glass beakers into makeshift bongs to psychologically destroying visiting royalty for mistreating the lower class citizens of their Empire) and their eyes eerily glowed when they were angered. At their coronation, the ritual in which the Emperor would receive their full power would fail and it was there where Lola would learn that their family bloodline was more than royalty, but also contained Eldritch and Celestial gods in their ancestry, which was where the source of the Emperor's power had laid. However, the fall they suffered early in their life had activated their powers early. Following this discovery, Lola decided nothing needed to change and they would continue to use this power to protect the Empire and the citizens they cherished so dearly--while plotting for universal domination as a tiny treat for their hard work. With the help of their younger twin as the Head of the Imperial Guard and their "kagemusha" and their trusted advisors, they put together a New World Order, and after one fateful hotbox in the Imperial Dungeons, Lola decided the best way to start? Through the world of streaming, which was easy enough as the Imperial Palace has impeccable wifi and some members of their New World Order were otherworldly beings from a nearby Nexus portal who also streamed as well.