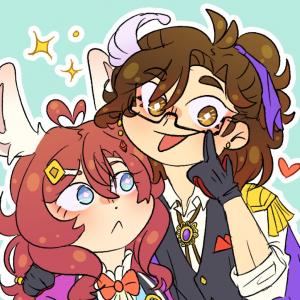 Lokiiru, formerly known as RiharuVT, is a double-model channel who makes content in English, Japanese and Vietnamese.

They are nonbinary and uses they/them pronouns, classifying as a chaotic neutral INTJ-T. Their birthday is on April 6th.

They are very well known for being a simp, being incredibly attached to fictional characters. Sylvain Jose Gautier from the Fire Emblem series is the most prominent character Lokiiru talks about. Perhaps there is more to this attachment than we know..?

A being with two forms, that can change into either at will. All in all, it seems like the same person with a different appearance! Lokiiru comes to this world, Earth 982, from another working for an agency called the "Dimensional Higher Order" (DHO). Those in this order are treated as a higher being with extra powers in their home-realm. In this world, they could be akin to the human definition of a "god".

It is said that it is for gathering data, but they seem to have settled well interacting with the humans of this realm and playing its games.

RIHARU MIZUKI: A form of a time-hopping bunny, in this form they find themselves more drawn to be very engaged in the discussion of stories, gaming or otherwise. They are more calm than when they take on the form of Riharu, streaming chiller things to relax.

Riharu is astounded that the story "Alice in Wonderland" has a character with a similar aesthetic to them. They also love Doctor Who, thinking back on memories made while travelling.

LOKI BACQUE: A form of a royal angel that can't necessarily be determined to be good nor evil. One of their wing privileges were taken away due to being a nuisance to the Boss. As Loki, they appear to be more chaotic and like to play games that use their brain.

Loki especially enjoys analysis, and can switch from cracking jokes to heavily talking about a character's lore. The Fire Emblem and Genshin Impact series reminds them fondly of the battles and magic of home.