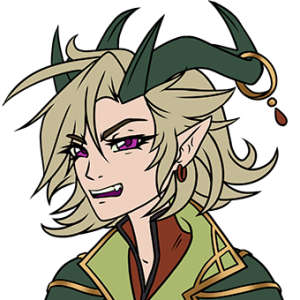 Known as "Your least favorite VTuber", Lark strives to be the best at being the worst. His cantankerous attitude and non stop rambling will leave you wondering is this guy ever takes a breath. He streams a variety of games and likes taking the most infuriatingly off meta build to get anything done because he's a closet masochist. His inflated ego will having you wanting to punch him in the face, and you'll hesitate because you think he might actually be daring you to? All bark and no bite, Lark is extremely cautious to not say anything actually offensive or hurtful while teasing his viewers and encourages a healthy light hearted bantering interaction.

Lark will never miss an opportunity to tell you he is a Libra, and that they are the best sign. He'll also never ever let you escape your 2012 tumblr phase as he drags you kicking and screaming back down the rabbit hole of homestuck nostalgia on an almost weekly basis. If you ever had a fan troll, he will make you feel safe in digging it out of the garbage before laughing at you for it. This tsundere will never outright say how much he appreciates everyone around him, but he will ask you about your special interests and genuinely listen if that means you'll stick around longer. Once you look past all the snark and bullshit, he's sometimes a thief with a heart of gold.

Lark is the World's Greatest Fey Thief. Standing at 2.75 inches tall, which is totally normal for a fairy and definitely not short, Lark earned himself quite a reputation. Living by the code "No Gods, no Kings" he quickly faced the harsh reality that even the best get caught sometimes. Stealing from Oberon, the King of fairies and fae, was as easy as all his other heists, however, he just couldn't resist a good taunt on his way out. His performance landed him in a Terrarium like prison. Another prisoner lurked in the brush with him; Saoirse, a "totally normal mantis" was assigned to work alongside Lark as an artist while he served out his sentence. How long is that? What a stupid question! Time is subjective in the Feywild.