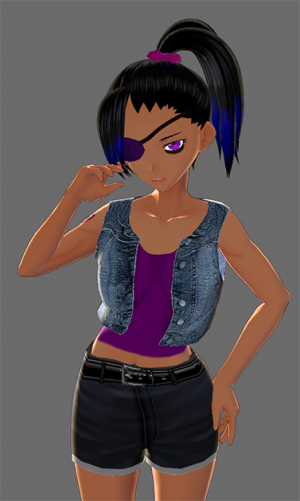 Lia Denailo is a female VStreamer focused mainly on video games. She seems to have a bit of a morbid and sociopathic side to her as a lot of the game she plays are darker in theme yet she seems relatively unaffected, even to the point of not noticing dead bodies. Random stubbornness is also a quality she has and sometimes her chat will have to tell her to stop trying to set an item down "properly" or to "solve the puzzle the right way".

Lia is also fairly genre savvy and enjoys calling out the tropes, seeing them be twisted, and even berates herself when she misses an obvious one. Though more often she just enjoys making up her own headcanon as she plays a game to fill in gaps until the story corrects her.

Lia has a phobia of bugs, though luckily bugs in games don't seem to trigger her. She also hates birds with a passion, and will actively seek to kill or at least insult any bird she finds.

A note on Lia is that she has never had an "official debut" with all the fanfare and such. She claims by the time she even knew they were a thing in the VTuber community she had been streaming for a couple months.

Lia has stated that while she does have lore, she feels as though a majority of the EN community doesn't seem interested in such details so she never made a display of it.

Lia does sometimes drop bits of info randomly. She seems to have lived a somewhat exciting but still normal life, but sometimes she says things that don't...fit. Such as when asked what her birthday was she replied "Which birthday? Ah well, here's both. December 30th and the 15th of Waischet".