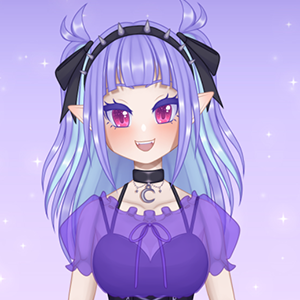 Lenore Von Allan is a genderfluid (Her/They) English Virtual Streamer and Voice Actor who streams on Twitch. She debuted in October 2021 but began streaming in August 2021 to get her feet off the ground. She plays a variety of games such as Dead By Daylight, Animal Crossing, JRPG and Rythem Games. Her favourite colour is many shades of purple, and alternative fashion. Lenore has a very eccentric personality, has been called "cozy" before, and she loves to spend time with her coven the most! Her awaken day is October 31st, but before she was turned, her human birthday is April 18th. She celebrates both! Making her a strong-headed Aries.

Lenore was your average human once upon a time. But one day, some random vampire swooped in and turned her into a vampire! Lenore does not know who her creator is, but she one day hopes she can uncover the mystery of her past. Once asleep during the night of her turning, Lenore slept the first 972 years of her life, causing her to awake in the 20th century. Her current residence is in the great white north, but she has travelled to many places looking for her creator. Lenore has a familiar bat named Lucien, who serves his master faithfully. Lenore has learned how to use technology over the years and has begun her new journey as a vampire on Twitch, making new friends all along the way! Will Lenore ever uncover the mystery of her past? Maybe one day. But right now, she is just glad to have built a coven of ghouls and fools to keep her company!