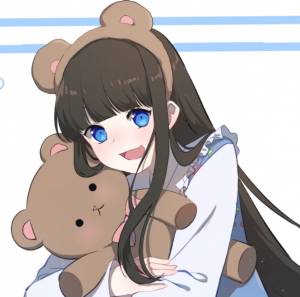 Larrybearyy is a female Vtuber that streams on Twitch. Larry is a variety streamer as she would always play a lot of games. Larry would usually play Apex Legends , OSU , Minecraft and Just Chatting. Larry communicates in English, Japanese and Cantonese. She joined the Vtubing Community around December 2020.

A sleepless bear girl. Larry's origins are unknown , many have been suprised with how highly functional she can be even without any good sleep.. In a world , trapped in her own bedroom , playing video games non stop. Some would call this bear "Bear but make it a degenerate" . She is not exactly a bear , she is in fact a human but she is 200,000,00 Years Old. Larry always carries a teddy bear with her named "sero" , Sero is the source of her magic power to heal / create a shield / protect the one that she cares about. Larry has an adopted brother named "Bo" but we do not know any information about him yet.. Even if Larry's a sleepless bear , she never gets tired at all. Is it a part of her power? Nobody knows. Nobody would mess with her because turns out she is also a ruler of a nation , The Larry Nation.