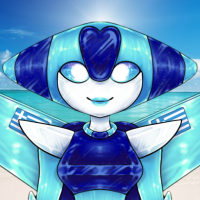 Ionia (That's with an 'i', not an 'L') is an English speaking robot VTuber based in the United Kingdom. She is a professional actress (Movies & TV) and VA, as well as an illustrator and designer.

Ionia, member of the Hellas faction led by a big robot called Olympus, was created by two other robots, Pulsar and Medusa, who were reversed engineered by humans from a robot that fell to earth from space. She was originally created to assist the team with natural disasters, as she sported both water and fire-based abilities. However, her awkward coding lead to a dual personality developing which became dangerous to both humans and bots alike, so they had no choice but to separate the two into their own individual bodies. Thus, her sister, Aetna, was created.

Due to the separation, some of the neural networks were shared, or misplaced. As a result, Ionia is incapable of getting angry. If she is in a situation where she should get angry, she glitches due to being unable to connect to the missing emotional programming. Aetna, on the otherhand, lacks a lot of the more positive emotions which Ionia possesses.

Ionia has onboard water tanks which she uses for her new job. The team firefighter. The large front panel on her forehead acts as a sensor and can sense smoke from miles away. Her wings are extra sensitive, as she needs to be able to sense air pressure changes during flight, as well as potential tremors in the earth.

She is 15 feet tall and is solar powered. She protects the Ionian island of Zakynthos.