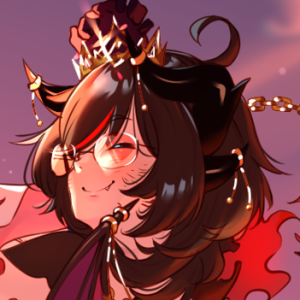 Kyllier Verena Dalamiq is a Dragongirl VTuber and Variety streamer, with content directed towards mature audiences. She has been known for her soft velvety voice. You can find Ky doing anything from Voice Acting in JRPGs, trying not to die in Metroidvanias and Souls-likes, or reading softly in the ASMR category. This streamer does her best to promote a comfortable environment while also being flirty with her chat. We hope you enjoy your stay within the Dragon's Nest.

Earth, a world populated by Humans. There are seven billion of them that populate this planet and the number keeps rising. However, behind the shroud keeping the humans away from the fantastic, there exists a realm filled with many different wondrous beings of legend. This realm is called The Ebon Plane and is ruled over by the dragon courts.

Kyllier is the Princess of one of these courts, specifically the Shadow Court. Or at least she was, before her nation came under siege by an unknown threat. In order to flee the chaos, Kyllier made her way into the rift chamber that was kept within the heart of the castle and passed through it, winding up on earth with her powers drained completely. This was twenty years ago.

Since then, Kyllier has made her home in a cave within a mountain located near a small town.