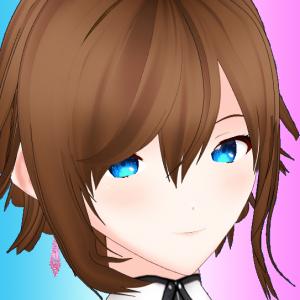 Kylie is a returning video game streamer but a brand new English speaking VStreamer. She's 25 years old and spent almost two months working on her model and setting up for her debut. She showed off her model for the first time live on stream January 14th and later playing GRIS for the entire stream.

Kylie is a wandering self-aware A.I personification of her creator.

Her mental capability to learn was hard-coded however to be on par with humans so her actual life-span and mental age is equal to that of a normal human at the age of 25.

She lives in the digital world on the internet and over time learned how to control and read code languages to manipulate her surrounding space and environments eventually giving herself the form visible by you, reading this right now.

Eventually her capabilities grew & slowly become more powerful, She re-modeled herself a few times and finally with a form she sees fit for herself online, She decided to stream games that she loves & helped teach her so much.

Kylie is able to on-demand switch her outfits & hair styles, and virtually her entire body can be edited instantly being a Virtual Human has it's perks.