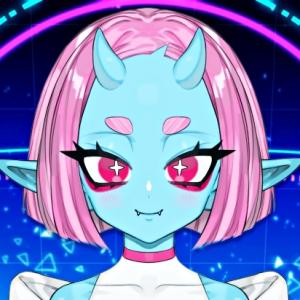 Kuu is a nonbinary Vtuber from Finland. Their content is mostly gameplay, but also just chatting. Story and puzzle games are their favorites, also enjoys horror even though it's creepy! Also works as an artist, and often shares their artwork on Twitter.

Mischievous space devil. Originally an android nurse who was created to serve humans on a space station. Turned out to be a faulty product though, and Kuu started to act strangely at their own will and share dangerous health services. Instead of actually serving the humans and caring for their wounds, Kuu often stole their drinks and watched reality TV from Earth.

Once a crew mate got injured in a battle, losing one of his arms, and Kuu performed a drunken emergency surgery on him. Kuu attached the hand wrong way around, and the crew tossed them out of the airlock.

After the fall, Kuu was found on Earth. After several bad choices, Kuu has been modified to resemble a devil.