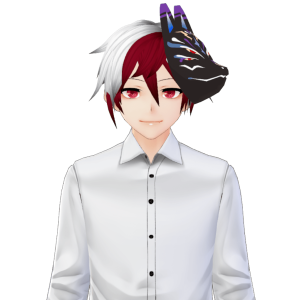 Kurogane Saisei is a male Vtuber that focuses on content that revolves around anime, manga, vocaloid, and etc. He also stream games such as digital TCG, gacha games, FPS, and RPG. Kuro works hard on improving his video editing, as well as motion graphics skills in order to spread Vtubing and anime to a wider audience.

Before he was known as Kurogane Saisei, he was a warrior who traveled all dimensions, seeking the legendary Purgatory Sword. When Saisei finally contained the sword, its ominous power was too devastating for him to control. The sword had taken over his body and mind. Saisei's life was ended by a mysterious individual before the sword could take over. Even after his life was cut short, he could still sense the corruption that the sword had done to his body. Saisei accepted his fate to die because he did not want to cause destruction across different dimensions. Ultimately, he was resurrected and reborn as a Half Deity. The person who took Saisei's life and resurrected him goes by the name Kurai-Oji. Since then, is unable to travel dimensions, to protect his domain that was previously the legendary sword's sealed dungeon. The corruption of the sword has become one with his body. As time passed, people would call him, The Deity of Armament.