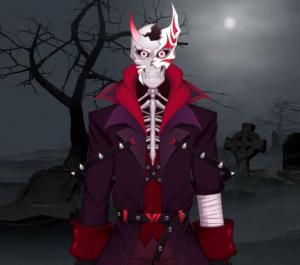 Konzetsu is a male skeleton virtual streamer that makes content in English. He has a "villainous" aesthetic, but is very friendly and helpful. His avatar is a skeleton, wearing a long coat with spikes, a hole in his head, and a broken kitsune mask. His content is mostly horror and RPG based. He aims to create a community "for everyone from all walks of life and beyond."

Thousands of years ago, there reigned a demon of immense power. Try as they might, humanity could never kill him. When driven to the edge, they learned of a way to forge a weapon that could seal away the demons power, and forged this seal into a giant club. The humans placed a trap, and the demon, being too self confident, walked right into it. Humanity prevailed, even if it was only a temporary solution, and sealed the demons corpse into a tomb.

In our current age, a lone necromancer found a way into this ancient tomb. She had heard of a powerful being sealed within, and thought herself powerful enough to control it. She found the great coffin that had the demon sealed within, and broke the barrier placed there. A rush of pure dark energy overflowed from the coffin, forcing the necromancer to her knees.

The demon had withered within the seal, losing his flesh and only his skeleton remained. His powers were a pale imitation of their former self. Even with this dampening of his demon form, he decided to subjugate the necromancer that raised him from the dead, and brought her fully under his control. The demon resigned himself to searching this new world for a way to regain his original form, and spread his reign over the world once more.