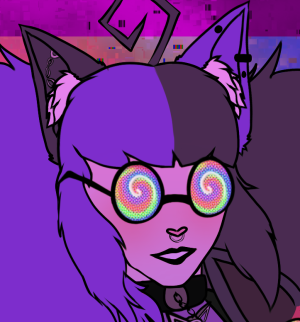 KitCat is an English, LGBTQIA+, virtual streamer. She has a preference for streaming horror games, especially indie horror, but streams a variety of games. On occasion they stream a collection of indie horror games that they gather from itch.io, but for the most part just streams whatever they feels like.

She currently streams on Twitch every Thursday, Saturday, and Sunday at 4pm - 8pm PST.

KitCat is a genetically-engineered cat girl who was created in the “Special Investigators of Mythical Persons (S.I.M.P.)” laboratory in an experiment to make animal-human hybrids. She was made using some scientific mumbo-jumbo, but basically scientists found a way to take cat DNA, specifically from a tuxedo cat with the “chimera” mutation, which explains her split-colored hair, and insert it into a very early-stage human embryo.

She was always referred to as “Experiment #420-69” instead of being given a proper name. The scientists didn’t want to get too attached in the case that she wasn’t able to live long, thus continued to call her by her scientific name. She spent most of her toddler years at the lab being supervised by scientists to make sure she was in good health. Every day consisted of multiple tests and examinations to see if she was capable of functioning just as well as a normal human baby, on top of being fed, entertained, etc..

Once she reached the age of 6, she spent her first couple years as a child being home-schooled at the lab. They wanted to test if she had any sort of learning disabilities before placing her in a public school. Once she proved to the scientists that she was capable of learning on par with average kids her age, she was moved into a loving foster family and sent to a public school, still required to send reports back to the lab on her progress and development. Her foster family gave her the name "KitCat" due to her love for the candy bar "KitKats" and eventually ended up officially adopting her.

After she had graduated from high school, she decided to pursue her passion for content creation in the form of live streaming.