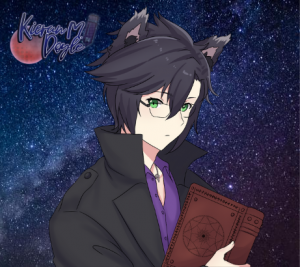 Kieran M. Doyle is a virtual wolf YouTuber and variety streamer who specializes in cozy, relaxed streams, with a particular emphasis on creative writing, miniature model painting, ASMR, storytelling, and education. His background as an educator is often utilized in his content. Most of his content is geared towards being family-friendly, aside from his love for holding people's hands and his liberal use of saucy language such as "heck" and "flippin'". He is known for spending a great deal of time during streams telling stories to his viewers, offering positive affirmations, making tea, and delighting in the delivery of dad jokes, punctuated with a well-timed rim shot.

Streams typically start with an inspirational Quote of the Day, taken from writers or philosophers, followed by a guided meditation and the day's designated activities. His usual activities are writing exercises, painting sessions, or relaxing video games, though he has, as of December 2020, begun working on ASMR content for his channel. Future plans include a VTuber roleplaying game group and a revolving cast of collab partners for a weekly board game stream. One of his many projects is to write a series of fantasy novels.

As a smaller indie Vtuber, Kieran spends a lot of time supporting and promoting other small streamers. This has left him with zero knowledge of larger figures in the field, especially at the corporate level, but he will happily welcome new people to the community and help to guide them as they get started.

A complete set of lore is in development for his planned re-debut in 2021, but some highlights include the following: