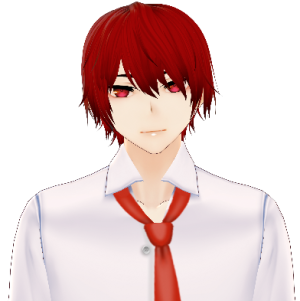 Kayama Koomori is a male VTuber who streams various games, including Dead by Daylight, Nintendo games, plus others.

During the Great Depression in Japan, Kayama was a 6 year old child, trying to enter into other people's homes to steal valuables for his deadbeat parents. One day, Kayama was caught red handed by a big, and the big man tried to beat him to death with a baseball bat. Kayama managed to get the baseball bat from the man and he starts wailing on the old man to death, his first kill.

His parents were terrified of Kayama now, they sold him to the Yakuza, and they all saw potential in the boy, they gonna turn him into an obedient Member. in 20 years time, Kayama became a made man, instead of guns, he used a Steel Baseball Bat, giving him the nickname, "Aka Koomori: The Red Bat"

One day, Explosions hit the Yakuza's base, riots and explosions all over, as the Big Boss demanded Kayama to protect him, only for Kayama to Betray and beat the boss to death with his Bat. This was all Kayama's plan. Kayama then went back to his old parent's home, seeing them still there, and Kayama beat them to death, just as the same as he did to the boss. He then hears crying in the other room, a baby girl crying in her crib. Kayama grabbed the baby and ran out the house, burning it with the two bodies inside it, and he went out to look for a better home for the baby.

After finding a lovely home for the baby girl to live in, he tried to leave, only to see that very house also set on fire, with the family and his baby sister inside it. Kayama tried to do something, but got surprised and stabbed in the back, threw his heart with a Katana by a unnamed Yakuza member. Kayama died on the scene.

Kayama then arrives in a dark room with a Desk. A man in a pinstripe suit and blood red slicked back hair enters in the room. It turns out to be Lucifer, listing all the horrible deeds Kayama has done in his life and that he has earned his torment in Hell, but Kayama wasn't paying attention to him at all, he was only thinking about the guy. Kayama offers a deal with Lucifer, that he'll do anything in order to go back to Earth to kill the man that killed him. Lucifer was interested to the deal, so offered to turn Kayama into a Demon and serve him as the Grim Reaper of the country, bringing all the Sinner Souls to hell, starting with that man.

After what felt like 10 solid years of Horrible, Agonizing pain, the transformation was a Success, and Kayama became a Bat Demon with new eyes, Wings and fangs. Kayama now has the ability to summon portals back towards Earth and even Limbo. Without Hesitation, Kayama Traveled back to earth, to the spot where he just died, as he disemboweled the man.

Kayama has served Lucifer for Decades, until he found a way for Demons to become as powerful as Lucifer himself. By Consuming the blood of another demon, Their demonic powers will be added to yours. Kayama took this Taboo discovery, and bit into Lucifer himself, Kayama tried to overthrow Lucifer to become the new Satan of Hell, but Lucifer Tricked Kayama, and banished him back to Earth, and banned him from Hell for all eternity.