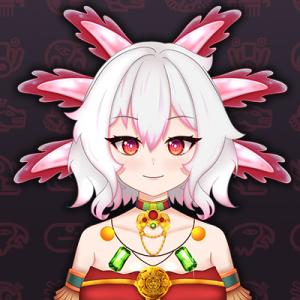 Kakurimo is an Aztec god in the body of an axolotl. His content is mainly speaking, singing and reacting. Also enjoy strategy and shooting games The first stream of "Kaku" was on September 10, 2018 on the Facebook platform, His official debut was on February 5, 2022 on twitch.

Kakurimo is part of the great Mexica (Aztec) deities who, together with Quetzalcóatl, decided to go down to the earthly world to meet his beloved people. Different events would cause Kakurimo to be banned from the spirit world, however the body he possesses does not have blood pure enough to resist the essence of a God. Only a trained body of pure blood is capable of containing a soul with such power, thus reaching Axolith, an ocēlōpipiltin trained by the best Mexica warriors of her time and who, helped by the shamans, managed to handle the power of the axolotl in her. . Not even the greatest warriors of the Mexica elite were able to stop the conquest experienced by the Mexica people, so after the fall of the great Tenochtitlán, the ancient Mexica gods dispersed throughout the world, protecting themselves from those new occupants of their physical and spiritual territory. Kakurimo ended up choosing Japan, a land of great and fierce warriors with whom he managed to feel less affected by the request of his life in Mesoamerican lands. With the rapid technological evolution that the current world is experiencing, Kakurimo has decided to learn from his ancient people, understand their current way of life and keep in touch with them, through the new worship ceremonies that some mortals usually call "streams" and thus manage to gather to his old people to at some point recover the great and glorious Mexica empire.