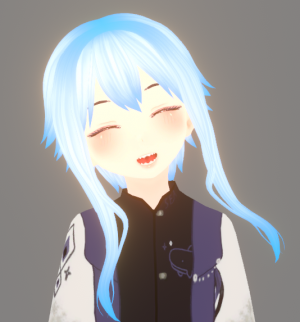 Kai Chizuru is an underwater shiranui who likes to prank humans and create chaos. Kai is now more permanently staying on the surface due to sea pollution.

Searching amongst the waves, you may find an ethereal being with hair that resembles purifying fire, but if you dare approach, the distance seems never ending. This mysterious child is a shiranui, Kai Chizuru. However, she does come ashore to interact with people – and by interact, it’s more specifically trolling. Kai Chizuru trolls the living hell out of people, watching with a snicker as they keep trying to plug their phone in when it’s at 10% battery only to find every single goddamn charger missing. As for who has them, it’d be this mischievous shiranui that will encase all their chargers in a block of gelatin. She also adores plastering her face all over the place – windows, screens, decks. She has a never ending supply of print outs of her face, and she’ll stick them up with cheap tape to ensure nobody can miss her beautiful appearance. Oh, but when they get taken down, she doesn’t despair because she always leaves staining ink on them. When someone rips it down, they’ll be forced to leave dark fingerprints due to the ink that reacts with skin, leaving residue all over. It doesn’t fade for three days. So, many swear they’ll torture all eighteen generations of her ancestors in anger, but she never lets it bother her. Instead, with a smug expression, she’ll run off to torment more people with her never ending glee. You won’t need to search for her. It’s more likely she’ll find you first.