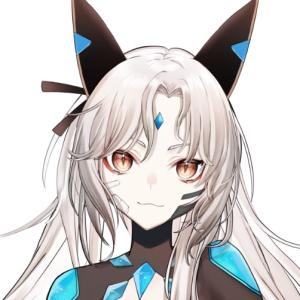 Jupiter (she/any) is a cyborg fox spirit that is cursed with a mysterious anomaly called the Voidfrost. In order to free herself, or at least remain functioning, she needs to cultivate Good Karma by streaming.

Her streams are chaotic but sometimes solemn. She streams a variety of games with a focus on chat interaction.

Once upon a time, more than two centuries ago, this fox was struck by an arrow. The arrow pierced through one of its legs, and though adrenaline coursed through its veins, it was unable to escape the looming terror of those dreadful hunters in the Mystic Realm.

You see, clever foxes had the ability to cultivate their ‘chi’ and eventually ascend into a more human-appearing form: the Hulijing, who feed on human affections and have thrown whole kingdoms into chaos with their wit and their cruelty. It became a sport to hunt down foxes before they grow wise enough to ascend.

This injured fox found itself under the porch of an old shack, seemingly unoccupied, but it was eventually found when it could no longer contain its whimpering. The owner of this shack took the fox in and kept it safe from those greedy hunters, nursing it back to good health.

It was the first time this fox has ever been given love and affection.

The fox knew that it wished to stay with this human.

Humans grew old, however. Cultivation of ‘chi’ took this fox fifty years. In fifty years, this fox was able to ascend to a proper Hulijing, arriving back at this shack, where its savior had become ill with old age. The Hulijing stayed with its keeper until their very last breath, nursing them just as they once did for her. It was no secret to the Hulijing, at this point, that she fell in love with the human. She wept for days in their passing, using her own hands to bury to the human.

But she would not escape the hunters. While she tried to tend to the old shack, the hunters tricked her into revealing her true form— and cursed her. If a Hulijing fed on the warmth of affections, then the cold of cruelty would destroy her. The hunters defeated her and cursed her with Voidfrost, then sealing her under a frozen lake.

For 200 years, she slept in this ice; cold and alone. If she happened to wake, her screams were muted. At times, she dreamt of freedom. She wondered if seeing the human again for those months was worth these years sealed under ice.

But she was saved. When she woke, the world was different. Hulijing have been hunted and destroyed to death, but her love for humans kept her alive — it was the only source of warmth she felt in centuries.

A curious mechanic took her in.

Her body had been frostbitten and deteriorated. She knew she wouldn’t last long if she stayed in this state, and to her, it was time she finally found peace.

“I can put you back together, but your life will forever be tied to the Voidfrost curse,” said the mechanic. “Human affections alone will not save you. You can no longer hide. With this new body, you’ll need something more. Luckily, you arrived during a time of great technology.”

She couldn’t move her head to nod, but perhaps her eyes said it all.

“Your eyes — it reminds me of a planet.”

She could only blink.