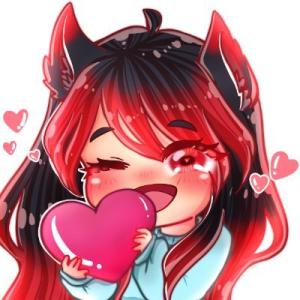 Juniper is a 21 year old English VTuber that mainly streams on Twitch but she is also a YouTuber. She enjoys playing and streaming with her friends even if they get crazy. Juniper enjoys playing almost any kind of game rather it be by herself or with her friends, she mostly plays Genshin Impact and Minecraft but she also plays many other games like Fairy Tail, Left 4 Dead 2, Soulworker, God Eater 3, Halo, Danganronpa and so much more!! Juniper also lives in the United States with her time zone being EST - Eastern Standard Time, she also doesn't have a Stream/Posting schedule due to her job so keep an eye out for random streams!

Juniper Shi-Winborn was born around 360 years ago on December 25th in a kingdom called BlackMoon with her younger twin sister Ashlyn. Even though they are twins they are not the same, Juniper is half werewolf and half vampire and she can use some magic while her sister is a werewolf, demon, vampire and a 9 tailed fox who can also use magic.

One evening while Juniper was walking around on the castle grounds she had heard the guards talking about killing her so Ashlyn could have the throne - I mean they didn't want someone who wasn't strong and powerful to be their Queen. That night Juniper decided she was going to leave her kingdom and Sister behind to save her life plus she already knew her sister would become the Queen - it's something the elders had already told them in private until they decide on a good time to tell the kingdom that Ashlyn would be their Queen. Juniper packed very little for her journey but enough to last her for a little while. She was upset to leave but knew it was the right thing to do, she didn't have a plan or goal just she wanted to make sure she got as far away from BlackMoon, her kingdom and life, as she could.

The moment she left her kingdom she felt...free? Like someone lifted something off her shoulders like there was something weighing her down, she couldn't tell what it was but she was happy that was pushing her down was gone now. She started her journey towards her new life by herself meeting many new people and friends along the way and not one person asked her about her past, where her family was, why is a such a young girl all alone in a dangerous world, maybe it was normal seeing a little girl walking by herself? Who knows but Juniper didn't care even if someone asked her, she would just say her family is dead and she's all alone exploring the world looking to become stronger - it's not a complete lie just half of it well the only lie is that her family is dead but not like anyone is going to know the truth.

Juniper learned eventually that the colour of her werewolf ears and tail where special and super rare so she learned how to hide them around strangers and people she didn't trust. She also learned her vampire side doesn't want human blood but animal blood which made her feel a lot better! She didn't want to kill humans. Juniper also started teaching herself magic but ended up finding a teacher that helped her more then anyone ever could, he also taught her things that people in the castle didn't let her do - like cooking! She fell in love with it the moment he started teaching her even though she messed up...a lot.

After a few years she heard rumors that the BlackMoon Kingdom started saying that the oldest daughter, Juniper - herself, was murdered after protecting her younger sister Ashlyn even though she knew that was a big ass lie! But she didn't say anything, it's better if people knew she was dead then missing plus she knew the kingdom wouldn't ever say the truth, that she left and ran away but she couldn't care less since she was happy with her new life and ready for more fun adventures in the future by herself and exploring the big world!