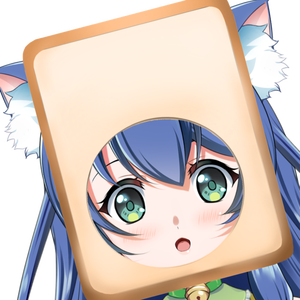 Juni is a female virtual streamer and YouTuber who delivers content in English. She plays a variety of different games ranging from horror to farming simulators. She also likes to sing and does karaoke on-stream often. While her content isn't specifically curated to adults, she often plays mature games and will tag her streams as 18+ during those instances.

Juni was once a normal frog umbrella given to her master, Yuuki on her 3rd birthday. Yuuki took her umbrella with her everywhere as she lived in an area with a long rainy season and grew very attached to it. As years went by, Yuuki slowly started keeping her cute frog umbrella at home and eventually moved off to college where she became very busy with studies and new life.

Thus, the forgotten umbrella became a karakasa, longing for the companionship it once had before. Unlike other youkai, this karakasa did not wish to prey on humanity. The umbrella simply wanted to go out and make as many friends and meaningful connections as possible to engage in happy, fun, positive, and loving memories with others.

Juni took on the form of a catgirl because she saw that they were a huge hit with the humans via all kinds of sources like visual novels, video games, and even tv shows! She took on the name Juni to always remember the great times she had with her master Yuuki in the parks with many evergreen bushes.