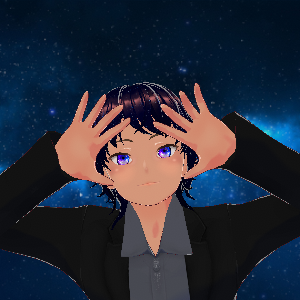 Joy, also known as happy, is an English-speaking Vtuber; they have stary hair and eyes that look like the universe. they have tan skin color and are very handsome ;)

Joy was created to contain the evil within his reality, he had no recollection of his birth or childhood. He had nice silver hair, a tall stature, and hazel eyes.

He awoke in front mysterious white tree evaporating. Its mist started to swirl around him and burned a tattoo of a tree on his back. All he knew was his mission, and nothing else. As time went on, he became a harmless evil being; but he was so evil that reality itself recognized him as a god. His very soul was tainted by what he had contained. The tree he had absorbed was called the wisdom tree, It was the holiest artifact in his reality.

One day in the plain of gods, he met an interesting girl, which he liked. She was smart, quick-witted, a shut-in, kind, and spontaneous. As they started talking more and more, they decided to try dating. She created a small universe that Joy adored with all his heart; soon, they fell in love, but one thing was amiss. Other gods or beings didn't acknowledge the girl. The gods outright denied her existence in front of him. He felt hurt but knew she was real, so he kept quiet.

It went on for a while, and his heart got used to it, but everything was about to change. One day his beloved was struck by a curse; he did not know who did it or why. He pleaded to anything that would listen, but all they saw was an evil god telling lies. Then, she passed away, leaving nothing behind.

He felt every negative emotion intensify; he knew someone did it. No one confessed, so he searched for centuries, looking for clues. He found records conflicted; she had no records but was clearly in front of him. Nothing made sense, and during all this confusion, another god made a grave mistake. He told everyone that joy was lying and rubbed it in his face.

Joy snapped! Joy took her universe and absorbed it into his eyes. No one knew, but Joy had incredibly dangerous spells at his disposal, left by a being above his reality. The tree of wisdom contained all of them; one of the spells left behind could engulf and absorb reality itself. The price? The most precious thing to the caster, for Joy, was his memories of her. Mad with rage and the sense of betrayal, Joy invocated the spell.

In a flash, Joy had thought he had completed his revenge against the one who cast the curse. He escaped his reality; he found himself in front of this new reality. It had different creatures, powers, even food. Though that didn't matter to him, he had completed his revenge; since he absorbed his reality, he could search for the one who cast the spell and all the records.

What he found shocked him, no one in his reality cast the curse nor did he find any more clues about the girl. It didn't make sense; How could this be? Then, the wisdom tree suggested, " If the one you seek isn't in your reality, why not look above your reality?". No clues of her birth/death, the curse, or his birth were found. They all had to be from a higher existence!

Now he searches for the creator of the spells to regain his memories and revert the spell. He also wishes to seek who and why they messed with his reality.