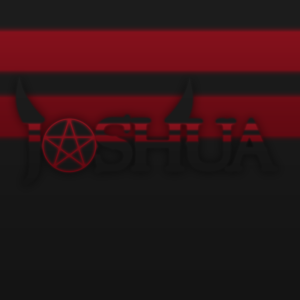 Joshua The HEMON is a half human half demon VTuber who lives in HEMON'S HELL (Home of the HEMONS). Joshua streams a variety of games in English but one of his most favorite games is Just Dance. Joshua has powers to summon demons from different worlds, that's why he is known as the king of HEMON'S HELL.

June 6th, 2006. There was a big earthquake in the human world. During that earthquake a little crack opened up causing some people to fall in. The ones who fell in were in a space underground with some smell. The smell caused everyone to look like a half demon human creature known as a “HEMON”. The area was soon to be called ‘HEMON’S HELL”.

June 6th, 2007. A married couple who were one of the HEMON’S had a baby named “Joshua The HEMON”. Joshua The HEMON was later the king of HEMON’S HELL when he was 8 because he had summoning powers and can summon any demon from different worlds.