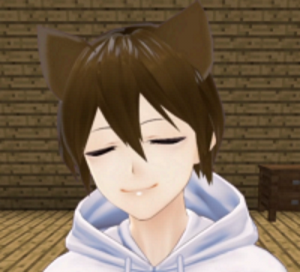 Jearldster is an English Tanuki VTuber. He typically streams games such as Minecraft and Pokemon but very often picks up a random suggested game. Most commonly you can find him chilling on minecraft or doing a challenge run of a game. He's a relatively relaxing streamer, however sometimes he reveals what could be his actual personality and commits great crimes within a game even if it’s directed at other people.

He hasn't had a debut stream and when asked has said he has no intention of doing one, as he doesn’t feel like doing one.

Jearld is 19 years old and is currently a programming student in the UK working towards a degree.

He is an insomniac which results in him having lots of free time to stream pretty much daily. When ask he has revealed that he has no cooking skills whatsoever and boasted about recently learning to turn on the stove. He claimed to live off a diet of pot noodles, pizza, hot dogs and sandwiches until recently.

He founded a streaming group known as The Loading Screen on 29/04/2020, which is a group consisting of VTubers and IRL streamers aiming to create a community of streamers who work together to grow and help out newer streamers.

He also participates in a bi-weekly podcast (The Loading Panda) where he and some others will answer any questions and talk about random topics commonly getting side tracked.

A kinky Tanuki wanted to go and save the world with the help of pokemon and is slowly gathering his army of fellow streamers and pokemon.