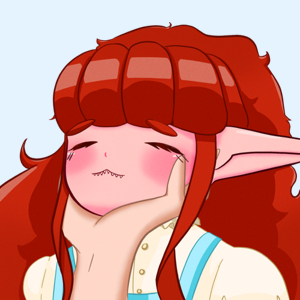 Jade is an English Vstreamer who makes wholesome yet mature content. She curses a lot when she speaks, but tends to be a bit on the quieter side. She keeps her streams friendly and is very welcoming of everyone, regardless of who they are.

Her content includes Art and Games, ranging from chill Minecraft streams to Horror. Her content is friendly for most ages, however it is marked as mature because of the language she uses regularly.

Where did Korl come from?-

Korl is a wood elf oc(Original Character) created by Jade herself. I have always loved making up stories on the spot, so while playing a variety of games; (Sea of Thieves, Minecraft mainly) I came up with Korl. I can't say exactly where she first came up. She's always been a part of me, even without a face or name. Korl herself (Overall personality and design) was created while playing Sea of Thieves and her lore stemmed from Minecraft.

Korl is an impulsive character who often teases others, or makes interesting threats.(ie; I will revoke your kneecap license.) The character herself is often aggressive at first, even going as far as being overly bold, but is really friendly once someone gets to know her. She has an obsession with a god known as StoneFace and has a redeem for her cult voice! Check it out! :D

Korl wears a soft blue dress over a light tan puff sleeve shirt. She never shows her neck, and her dress always goes just below her knee. The bottom of her dress is ripped up and grass stained from years of living in a cave. She never wears shoes. Her nails are long and sharp, and her teeth are sharp from grinding them down with rocks in an attempt to please the voice in her head(StoneFace). Her hair is an orange-red colour that is styled in a large poof of curls, though her bangs are straight, often being seen in sections of 3 to 5. She has two strands of hair that always curl down from either side of her face. Her eyes are the same color as her hair.

Glad you asked! Korl has a few different lore types based off the video games I play, but they are relatively similar and always lead back to the same fate. In Minecraft, Keenan and I had accidentally placed a dropper instead of the furnace we had intended to make. Because of the texture pack we had on, the dropper had a face, so we just shoved it in the wall of the mine and gave it a name. "Stone Face Jesus" We gave him a red wool body to go along with it too! Every time we went down, we'd say hi to it! Eventually, it became an ongoing joke between us, and we referenced StoneFace in everything we did. While playing Sea of Thieves, the character I had made eventually was merged with the joke and became known as 'the cultist.' As time went on, I made up things as I usually do, and eventually came up with a reason for her being insane, often boarding ships using the cultist voice to mess with people. I had a ton of fun with her that I started using her in roleplays, eventually leading me to her dnd lore when I played my second ever game of dnd!

Korl was nobility to the kingdom of Greenwood. She was young at the time, only 11 when she began exploring the world outside her kingdom. Upon finding StoneFace, she thought nothing of it and just decided to make the cave her hangout spot, like any kid would. However, trouble was stirring in the kingdom. They were planning to marry her off for money. Deciding she was no-ones pawn, she fled the kingdom and began living in the cave, attacking passing caravans for food. After years of not having anyone to talk to, she began to hear a voice, which she came to know as StoneFace himself. He began telling her to do things, such as stealing more, filing her teeth, sharpening her nails on the cave walls. Eventually, Korl's attacks on caravans became more violent and she grew to like the taste of flesh.(Based on Wood elves lore from The Elder Scrolls.) Now, after 11 years in the cave, Korl has become entirely feral and due to the voice in her head, she no longer has her own conscience.

On stream, Korl's real personality is kind of put on the back burner in favor of a mix between Jade and Korl's personalities. She is still a bit impulsive and sometimes talks about StoneFace, but interacts with the audience, often reading out comments and replying to them. Korl loves to interact with chat, and loves to talk about lore of the many characters she made over the years. The fastest way to her heart is an active chat. <3

How did Korl become a vtuber?-

Korl's first stream was October 7th, 2020. After being introduced to streaming by KentinaStar , she became hooked. Jade met Kentina on VrChat and instantly hit off their friendship. Kentina was able to handle my initial barriers to friendship and saw right through me, laughing at my initial threats and jokes. She became my friend right away, and I was actually super surprised that she wanted to keep being friends with me. Kentina was super supportive(still is) of me, and encouraged me to get into streaming, helping me to discover there was more options for streaming than just turning on a camera and letting the world see my face. Korl was a safe way for me to express myself while also sort of wearing a mask. It took me awhile to get comfortable with streaming in the beginning, but I stuck with it and eventually made a schedule to follow. I eventually built a community for myself that I love, and I have KentinaStar to thank for it.

What do I hope for in the future when It comes to streaming?-

I honestly don't hope for much. I hope to grow a larger following so that I may make more friends. I hope to bring smiles to peoples faces and encourage people to believe they deserve good things, because they do. Everyone deserves to be happy, and I want to help them by making them laugh. I want to grow out of my comfort zone more, and eventually make a life for myself. I want to get better at art and eventually make it my full time job, but at the same time, I love gaming too and want to provide entertainment to people. I hope that my community can be a safe place for people to just come in and talk about their day if they want. I love listening to others!