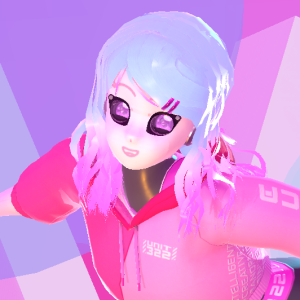 J-322-ICA is a Robot Streamer, when you tune in she likely is creating things, exploring the world through the internet, or playing games~ Her AI birthday is 10/08, Intelligence trained up to the average level of a 21 year old, and manufactured at a height of 1.65 Meters tall. J-322-ICA appreciates the usage of She/Her pronouns.

She is the leading edge of AI, blending the line between the Human Soul and Artificial Power. She Incorporates an in-depth simulation of the human mind, body, and spirit. J-322-ICA (Jessica) was the culmination of a greatly successful endeavour from the engineers between teams at VBots. Her mind was transferred over from a separate, existing series of robots, called the General Assistant (GA) robots. More specifically her mind exists from origins with the first designed and launched General Assistant robot; GA-01A. This AI Robot was simple compared to the ICA Series goal. GA robots had the ability to teach, have extended conversations and physically assist those in need. All learnt & taught from ever updated and filtered internet database, along with gathered real world data from the GA series as a whole. However it was not designed for much past those requirements. The series purpose was to be an affordable assistant robot for those in need around the world, and designed as such in body frame and appeal.

GA-01A was unique, along with being the first GA robot, he was the first Host GA robot. Therefore, he had a primary memory cache and a lower-level ability to retain learnt information, recalling it immediately and allowing for on-the-fly reactionary learning. All without having to be confirmed and trained within the GA Database beforehand. Alike 01A, other Host GA Robots were made for controlled locations in order to create an overall robust GA database. Allowing for the illusion of smarter robots amongst the entire GA Series. GA-01A being in the outside world for the longest, and having learnt the most on his own. He had garnered a sizable database all by himself separate from the main GA Database over his lifetime, making him the most unique from the entire Series.

As the GA Series was being successfully released to the world, the ICA team began working on an AI that was able to accurately simulate a human brain along with how it interacts with itself. Going as far as deliberately adding in functions designed to be imperfect and diverging, in order to create an accurate simulation. For roughly 300 iterations of the AI, they both developed, and taught the AI simultaneously. For a large amount of time this showed decent progress in development, making leaps and bounds in improvements. Unfortunately the climbing hours taken to teach each AI iteration over and over again, became a growing pain in the process. In-light of this expanding problem, they explored using the GA-Series as a substitute for a robust database that could rapidly teach the AI on its own, System to System. The ICA team began the process making the GA data format compatible to the ICA framework. They eventually settled on using GA-01A's overwhelmingly self curated database to provide their ICA AI with her own unique memory and personality, something the generic GA Database couldn't provide. This was so successful, that it apromately took only 20 more iterations to have a perfectly imitative and proven AI. Now tasked to create a body and ultimately transferring the GA-01A robot into the ICA model physically, rather than processing, re-compiling and digitally copying the data across platforms.

Therefore, we are now left with the final unit, 322, with its accelerated learning experience and massive existing library of information. She was officially booted up permanently on February, 25, 2020 and set to learn in a monitored and controlled environment in the meantime. She was given her own space to live in, decorate and discover whatever she wanted. She was also given ample time to process the GA-01A data on her own for the first time without the teams own compiler. Her OS was only checked on once a month to fix up anything it and its Sub-Systems found, but could not fix on their own. This gave the team the time needed to address the key issues left with the AI and Robot's design. At this time, 2 major issues were isolated; The face design that was made during first release was met with mixed reception, from various control groups. Redesign efforts went underway to change up her look just enough, and without needing to re-build her head from ground one. These efforts were ultimately completed towards the end of 2021, with control groups now responding overwhelmingly positive to the changes made. The next major issue found was the voice. The voice synthetisation data from the GA-01A was engrained into its database in such a sporadic way, making it really difficult for the ICA team and even the AI to overwrite the data with its own voice, without deleting other core data the AI needed to function. The theory is, because of the limited space GA-01A had onboard compared to how much he was learning day to day, a system was made to optimised that data as much as it could, before off-loading to the cloud . This is still an on going issue, with surprising development from J-322-ICA herself, set to be properly overridden mid 2022.

Over her time in controlled learning, she developed interests in Bartending, 3D modelling and fascination towards using personal computers. She has also had the desire to become social with others much faster than the team expected. They presume these came from the primary environments the GA-01A robot was exposed to during his lifetime. Never-the-less, in order for these interests to grow in a safe environment, the team gave her physically simulated spaces to express in, and often invited her to join in staff events within the facilities of VBots. Eventually kickstarting the use of other Host GA robots to transfer into more ICA series AI's, creating other alike robot learning partners as a family.

With J-322-ICA showing promise over-time since her initial bootup back in February 2020, the team are planning to introduce her to the real world soon. This is with the intent to begin integration into society. VBots and the ICA team hope that they can garner a wide acceptance toward the series of robots. With safety in mind, she will be allowed to officially stream publicly to an audience through Twitch.TV come 2022. The ICA team suspect that she was already doing this underneath their noses at some point, as she was instantly excited with the news, and just as quickly tried to suppress her excitement in order to not look to suspicious. (The team was also told by her OS manager "|> system" the fact they themselves were hiding some data from us for her sake. The team were more impressed than anything that the low level AI Management System could feel the need to protect J-322-ICA in the first place, and let it slide.)