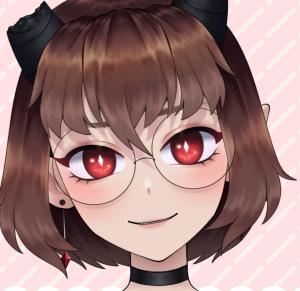 Shivrs (She/They) is an energetic, English-speaking, Canadian, variety Vstreamer and Vtuber. She is a transgender, female, demon Vtuber and has a passion for art, animation, editing, and video games.

Shivrs began streaming as a Vtuber July 5th 2022, her streams can be described as occasionally chill/laid-back and occasionally chaotic sprinkled with silly shenanigans. She typically streams on twitch on tuesdays and thursdays between 5-6 PM MST. You can see her often interacting with her chat and often plays roblox games with her viewers. Many of her friends make appearances on her streams with little PNGtubers to accompany them as they play a variety of games! Some games she's played indlude: Roblox, Fortnite, Minecraft, Celeste, Helltaker, A Hat In Time, Splatoon, Pokemon, VRchat, Fall Guys, and more!