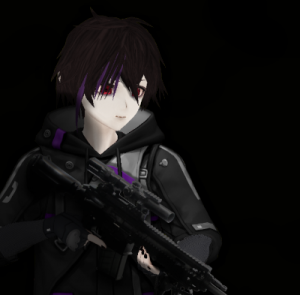 ioorunderscore, or simply ioor, is a vampír PMC from Scandinavia. Born from a loving family, if you can call a vampire family loving and had a pleasant upbringing. He got a love for the simpler things in life, for Metal, midnight snacks, coffee, big personalities, and anime.

When he's not doing vampire-things, he likes indulging in the vast knowledge of this world and experiencing some of it's finest entertainment, such as ̷h̷e̷n̷t̷... videogames. Preferably horror, shooters and survival games.

304 years ago, in one of Scandinavias most prominent vampír families a child was born, its cries could be heard from kilometers away. That child was going to be named Viktor (ioor). According to legends, a vampire-child bearing the 'marked eyes' would lead the vampires into a new Era, without the sun and without fear of ever having to die. But much to his peers dismay (or happiness), Viktor didn't evolve into this legendary child. He was just a regular vampire, with really pretty eyes. No matter what - his family still loved him.

When Viktor came of age, he started going out into the human world - "I'm just so, so curios. Why can't we live with them?". And with that sentence, the entire Scandinavian understood that Viktor was destined to do what no other vampire had ever done - Integrating into human society. Vampires living among it's former prey - vampires shaping a world were they can all co-exist.

Fast forwarding to modern times. Vampires are a common sight. Your boss, your tarbucks barista or even your next door neighbor! Vampires don't require only blood to survive, they can survive on regular food. The only thing they don't seem to happy about is summers, but who can blame them? And Viktor, now more commonly known as Ioor Underscore, is now a security contractor in one of the worlds many Private Military Companies consisted of supernatural beings. His company is hired to protect the Scandinavian people, mostly Swedes because.. IKEA or something... from other supernatural beings that don't fancy a world where they live in peace among humans.