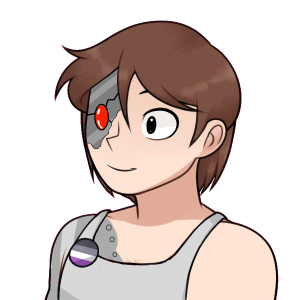 Immortalrich is a twitch streamer who makes content ranging in a variety of things from Video games, VR, Art, Voice Acting and mainly chatting streams. their favorite art-style preferred to them is anime/manga/chibi and is always willing to give extra support to those who need it the most.

Created by a Rouge A.I, Immortalrich is the first of it's kind in human cyborg relations. combined with a zirconium-steel alloy, it allows them to be granted with the ability to melt it's form into several organic shapes allowing it to blend in with humanity. The ultimate machine, it's mission was to take out the resistance of survivors willing to destroy everything the machines have built and was sent through time to neutralize the leader of said resistance but upon arriving in the past, it suffered a catastrophic malfunction leading to it's CPU to be fried. With the help of a group of young adults, it's CPU was restored but previous mission has been erased. it's sole purpose now is to create it's own army and lead the resistance onto victory.