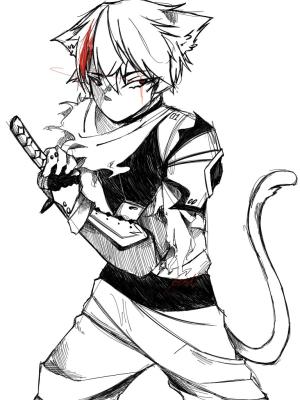 Ikari Yasashi is a chaotic catboy VTuber. He is a bounty hunter. He streams a variety of small games on Twitch.

He is lazy, unpredictable and has super speed (max speed is .75x the speed of light). He wears a heavy, very durable armor, and wields a katana.

Complimenting him often ends up with him denying the compliments, since he is a Tsundere. He does show some Yandere traits aswell.

He has a 3D model and a PNG model. He switches between the two at his liking.

His OC is a catboy with messy, mainly black hair with a red strand next to his right eye; cat ears that are mainly black and a bit soft red on the inside; red eyes with black heart pupils, and a black cat tail. If he is not wearing his armor, he wears a black hoodie or a black shirt with a red tie.

“Hey hey~ have you heard? Someone named Ikari Yasashi supposedly has infinite power! He considers himself the protector of the universe!” “I heard he lost most of his power during a fight. Now he can only go super fast” “Oooooh! Is that why he wears heavy armor? To protect himself from attacks?”

These rumors of Ikari arent exactly fabrications. Though his origins are an enigma, it’s certain that he was a powerful being. OP if you will. However, after a fight with a villain he lost most of his powers in order to save the day. What remained was his incredible speed. (what a hard nerf he got from the devs). With this unfortunate scenario, he dawns heavy armor to increase his defense and wields a katana for his attacks.

”However, because he cant really make a living on just speed alone, he became a bounty hunter for a living, while streaming games as a hobby!”