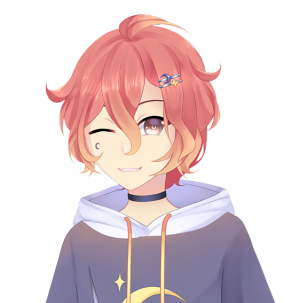 Haru Nishimura (はる西村) is a male English Vtuber from Canada. Currently operating as an independent vtuber and has no current corporate affiliation. He’s most commonly known in the indie vtubing community as a moderator for one of the largest English speaking vtubing community ENVtubers. He primarily does gaming streams on Twitch, however you can find him constantly posting “shower thoughts'' on twitter or bantering with another vtuber. What once started as a wholesome, chill-vibe, family friendly streamer has turned into a mutualistic “bully” relationship between the streamer and chat (mostly to the streamer). He’s always looking to find fun and innovative content ideas to entertain the audience, whether it’s in his own stream or someone else’s.

I’ll literally do anything for content, as long as it makes someone laugh I’ll do it.

Haru’s backstory is that of an adventurer from another world of swords, science and magic. However one day he found himself in a dimension different from his own. In order to survive (and not appear homeless) he was approached a sketchy man who offered him to be an idol. Desperate for money he signed the contract, but realized that he did not have the talent to make it as an idol. Frantically he started streaming as a vtuber to increase his popularity so he doesn’t get exposed as a fraud (and eventually fired)