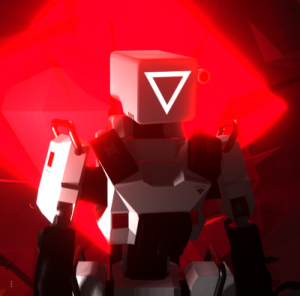 HΛRBINGER is a VR focused VTuber that primarily plays POPULATION:ONE on Twitch. This 8 foot tall titanium-polymer machine brings the pain, and takes names. Either commanding a legion, or preforming reconnaissance deep behind enemy lines, he will always leave a lasting fear in the enemy.

One of the earliest and only models of his series to survive over the years, HARBINGER is a testamate to the ARGUS CORPORATION's ARES Program. Being one of the first 50 fabricated using illegal medical practices to convert human consciousness into a digital medium, most of his records are drenched in black ink and complex firewalls. With now no name and past, he was given the designation 013, later to be re-designated as HARBINGER. Utilized and deployed in numerous corporate espionage cases, governmental infiltration, and black operations, his clearance level within the ARGUS CORPORATION succeeds higher than most their human personnel.

Over the years, HARBINGER has received upgrades and use of experimental reverse engineered parts to keep up with the 100 and 200 series FRAMES. These parts are made from the recovered [REDACTED] artifacts, which allow him to be utilized in the testing and interfacing of many high profile anomalous items and entities. Including hull composite, power cells, sensor suites, and data storage, upgrades past the 50 series do not receive.

In 2158, HARBINGER was transferred to a new experimental Personality Matrix and a FRAME sized Simulation Module. Assigned to Project Lazarus, researches have allowed him to simulate other realities. Although the early stages had significant development issues, funding, and limitations, a new breakthrough was discovered. After 2 years of research and development, a Simulation Engine was completed and ready for testing.

Instead of simulating other realities, the Simulation Engine instead through anomalous means, manifests the interfacing entity into that reality. If not a reality, it seems to create a new reality based on a Simulation Core's programming and parameters. The repercussions of interfering or creating other realities are unknown at this time, but through running these simulations the ARGUS CORPORATION aims to find the true meaning behind these artifacts, and the race that left them behind.