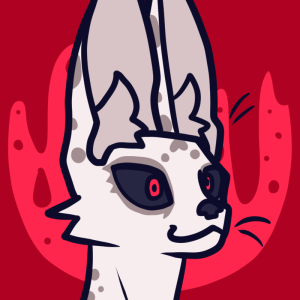 A Vtuber streamer who typically streams RPGs and talks about various stories of the past, and other strange tidbits of life. GoldeKlee also has an undying love for all things horror, and this often bleeds into their art. While their primary focus is gaming, they will occasionally break out in art streams every blue moon.

Once a leucistic serval that had escaped captivity. Shortly after, however, they were hit by oncoming traffic and became a ghost. This serval, with an interest in humanity, slowly began adopting human-like mannerisms before eventually changing their form accordingly. Not long in their time spent learning about humanity, they discovered video games and quickly became enamored. Now, they intend to share their experiences with "other humans".