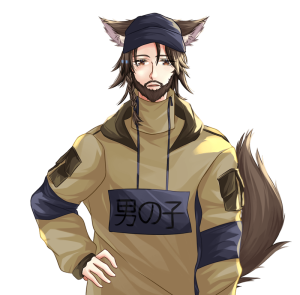 Glxtch is a chill dude who loves to joke around a lot (even though it gets him into a lot of trouble) and game with his friends. He's big into RPGs and fighting games. He's bad at describing himself to people so he tends to have people do it for him. He always treat people with respect and love and always help those in need.

Glxtch was out at a lounge one night and met the most beautiful woman he has ever laid eyes on. After a couple drinks, she suggested they go back to her place for a nightcap. Glxtch accepted and what he thought would be a night to remember, it would be, but not for the good. As he walked into the house, the woman went to "freshen up" and when she came back, had a huge fox skull over her head. Little did Glxtch know, he was inside a circle of reeds and everything went black. When he awoke, he was on the ground but for some reason, could not stand up. As he walked, he noticed everything was bigger. We walked up to a mirror and noticed that he was a fox! And the woman was nowhere to be found. Glxtch spent days roaming the city trying to find the woman who transformed him but he had no luck. As he traveled the roads alone, he came across an astral woman who knew he wasn't originally a fox. She casted a spell on him to turn him back but he was only half transformed. As someone who looked at the glass half-full, he would accept his new form and continue searching for the woman who cast that transformation on him while also living his life to the fullest.