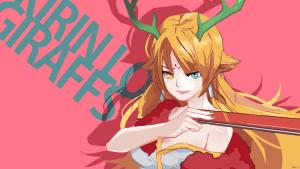 Post-war, the Kirin Lord emerged from the battle, hurt and injured. Crawling to a nearby cave, she hibernated there for years, awaiting for the day where the world needs her once again.

After 10,000 years, the Kirin Lord woke up to a blinding light piercing in. The cave walls shook as the rocks around her crumbled. Who and what is causing the disturbance? She stood up, knees shaking, arms heavy from the slumber, and walked out of the cave.

FLASH! A crowd of people were surrounding the area, taking photos and selfies. Ladies with their phones whipped out and snapping a bunch of photos of them and the scenery behind them. Kids were running around like headless chickens. Men gathering around and conversing with one another. What in the crockery happened while the Kirin Lord was gone?

The Kirin Lord was about to step out when someone tapped her shoulders, and asked, 'Can i take a photo with you? I love that show!' Confused, the Kirin Lord scooted in and snapped a picture with the stranger, clueless to the words that just left their mouth. More people started crowding around her, wanting to snap a photo with their favourite anime waifu.

Must been the horns, The Kirin Lord mused. Pushing past the crowd, she dashed to a nearby restroom, and calmed down. With her a dash of her power, she pushed her horns back into her head and transformed them into two pair of braids. Her boa, seemingly an anachronism in the environment, was shifted into a giant fur coat. She tucked the coat around her, relieved.

As she was about to walk out of the restroom, she heard a loud crash. She spun around immediately, and saw that one of the sinks was demolished. How could that be? Who did it? She then felt a pressing weight behind her, right where her abdomen was. She turned around, and saw a giant ass tail, swinging behind her. Because over the course of the hibernation, she had regressed to her true form, the Kirin, and her tail slowly grew without her knowing. Panicking, she stuffed the tail into her coat, hoping no one would see it. She then bounced off, puzzled by the new world around her.

5 years later, words were spreading around town. A new leader seemingly emerged into the scene of the streets. With flaming boots that strut the downtown, the gangs in town were afraid to see the sight of a big red fur coat. Known for her feisty personality, none would dare cross her, afraid she would be the last thing they see. But for the civilians, they knew that their protector was there to keep them safe. For the new Kirin Lord - Lord G was there to save the day.