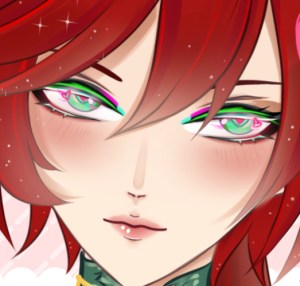 Euphie is an English Vtuber who seeks to bring positivity to the community and is often found playing a variety of MMORPGs and party games with fellow Vtubers and friends.

Euphie is the creator of all fae creatures. A long time ago she was nothing more than a creation herself, a companion for a lonely god. He poured color into her being and shaped her to rival the beauty of all divine gardens. In a bout of jealousy she was stolen away and used to amuse and distract the beings who would destroy the new favored pets of gods; humans.

The lonely god was stripped of all his color save for the deep blues of a night sky which he hid from his brethren by creating the sun. They bound him to his domain until one day a whisper came to him. A cry for help.

The lonely god shattered his shackles and followed the cry, finding Euphie cornered by the corrupted aberration of destruction. It had grown tired of the colorful creature. Seeing no other option, the lonely god consumed the beast, freeing Euphie from her duty but corrupting himself in the process. Euphie cared deeply for her creator and clung to his side. The two sought out vengeance and found a new home among the dense forests of the human's world. It was there that they sought their revenge.

The lonely god took to the shadows of the world, creating yokai and spirits while Euphie remained among the thick boughs of the forest and created the Fae. Each were lovely and terrifying in different ways but all of them held their own soul. She taught each of her children the wrongs of the gods and allowed them to choose where they stood for she would be no better than those gods if she forced her will onto her own children. Off her children went, some creating kingdoms and some slipping off into different worlds altogether but they would all remember their mother who now slept amongst the boughs of the great forest, waiting for a chance to enact her own revenge