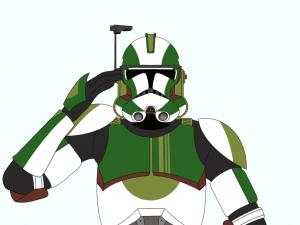 Kanaan is a Jedi Knight and Clone Army General stationed here on Urthha on a secret mission. Blending in to society by streaming Star Wars games and building Lego. Come join him defend the galaxy from the Separatists and maybe make some friends along the way.

Raised by his mother on the outskirts of Coronet City, Nas Kanaan worked from a young age to provide for his mother and two younger sisters.

Nas' father owned and operated a small trade company that took up a role of ferrying cargo between the core world's and the outer rim during the years prior to the Separatist Crisis. During one of these trade voyages, his freighter was ambushed and destroyed by bandits. The captain and crew were all killed.

With his father gone Nas' mother was forced to sell the remaining ships and hanger to prevalent workshop owner, Jakk Val'tar, on the promise her son would be kept on as part of the ship repair crew.

Jakk was a tough man and worked Nas to the bone, his wild nature and boldness often resulting in clashes between the two. It was during one of these fights, following the theft and joyriding of a customer's high end landspeeder, that Nas first flexed his connection to the force; hurling a several ton heavy laser cannon at Jakk, nearly killing him.

After this final straw, Jakk returned the boy to his mother and told him he could no longer work at the shop. With a demand that she also repay the damages he had caused.

It was not long after this that a young Jedi Knight found the boy out in the streets of Coronet using mind tricks to steal credits from travellers and hot-wiring speeders to sell for scrap. With his debts repaid by the knight and his family thankful, Nas was taken away to the Jedi Temple on Coruscant to begin his training.

After training for a handful of years at the temple with other younglings, Nas travelled to Ilum with a group of respective Padawan and crafted himself a Lightsaber with a mossy green crystals. Having completed his youngling training, he was assigned as the Padawan to the renowned Jedi Master Plo Koon. Serving alongside him throughout the Clone Wars.

Nas proved to be a difficult apprentice, who often struggled with the rules and morality of being a Jedi. While skilled in both telekinesis (aided by his master, who was well known for this) and mind tricks, he often used these to his own gain or out of physical laziness and was regularly scalded by his master for tricking the clones to clean up for him.

He also stood out for his abilities as a pilot, particularly of the BARC and ISP speeders used by him and the clones that served under him. As part of the larger 442nd Siege Battalion, Nas took command of Delta Company and led them to great success as reconnaissance and infiltration specialists.

Unlike most Jedi during the clone wars, Nas took a great liking to the armour used by his soldiers and as a bid to conceal himself within his ranks, often wore full phase 2 armour when on missions.

Stationed on the outer rim planet of Urthha (Earth), Nas and his troops are working to unearth and cut out a hidden trade network that the Republic believes may be supplying rare metals and minerals to the Separatists.

Today (3257LY), several years after completing his Jedi training, Nas now serves as a Jedi Knight and General of the 442nd Delta Company while his old master and the rest of the Batallions deals with the rising Separatist threat on Cato Nemoidia...