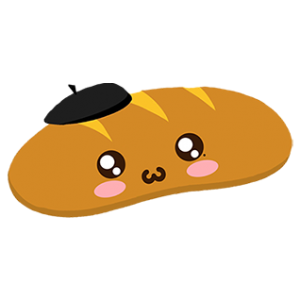 FrenchBread is an English baguette Vtuber/VStreamer based in the Philippines. He started streaming on Facebook on September 8th 2020 and made his debut livestream on December 13th 2020. He livestreams a variety of puzzle games, horror games, role-playing games on both Twitch and Facebook. Additionally, he creates a variety of content on YouTube as well. He is able to sing and enjoys the company of his viewers.

Some time ago, there was a jaunty wizard from a hidden floating island in France. This wizard successfully used neoteric wizardry to create a self-aware long and crisp loaf. The newly created bread quickly became bored of his mundane life, and grew a moustache after a short period of time. He wanted something to do, and so he searched on google "What to do when you're bored?". Following the suggestions of multiple websites, the bread begun playing online games. While doing this, he started to feel lonely and wanted to have friends. He one again searched for answers on google, resulting in his creation of an account named "FrenchBread". Considering his status as a self-aware bread and his current location in a hidden place above the clouds of France, he decided that it would be best to not be involved in the history of any country of the earth, and instead turned toward the virtual world. To this day, he is still playing games and making friends. If you want to see him, you can do so on his Twitch and Facebook livestreams.